The first house was built on the site by William Camden in 1609 but the oldest parts of the existing clubhouse date from 1717 (the Oval Room, the Club Office, the Imperial (Mixed) Lounge and the Louis (Club) Room).  By 1780, the house had been extended and the common enclosed for an estate park. Thomson Bonar, a Russian merchant, extended the property still further and added outbuildings, including a Well (the club’s famous “Temple” emblem).

The house is more famous for its Napoleonic connections and was altered to its present form by Nathanial Strode, an ardent Francophile, who attempted to create a minor French château in the Kentish countryside. So it was that when the French Imperial family fled France in 1870, Strode offered his home to them. Princess Eugénie left the house in 1881.

With its high ceilings and historic grandeur, this particularly elegant building creates a special atmosphere for golfing and social functions throughout the year.  Many of the rooms are decorated with original wall paintings and wall coverings of considerable historical interest and the Eugenie (Dining) Room retains its original oak panelling. Sundays see this impressive dining room packed out at lunch time.

The clubhouse has three bars to accommodate golfers and more formal occasions alike and is available, by arrangement, for members and visitors to host private functions including wedding receptions, brithday and anniversary celebrations and christening parties.

The Club organises regular events throughout the year, offering a variety of entertainment from monthly Club Nights to themed parties and our spectacular Summer and New Year's Eve Gala Balls.

In addition we have a Billiard Room which is available to members at all times when the clubhouse is open and the Bridge Club meets regularly, both during the day and for supper/bridge evenings. 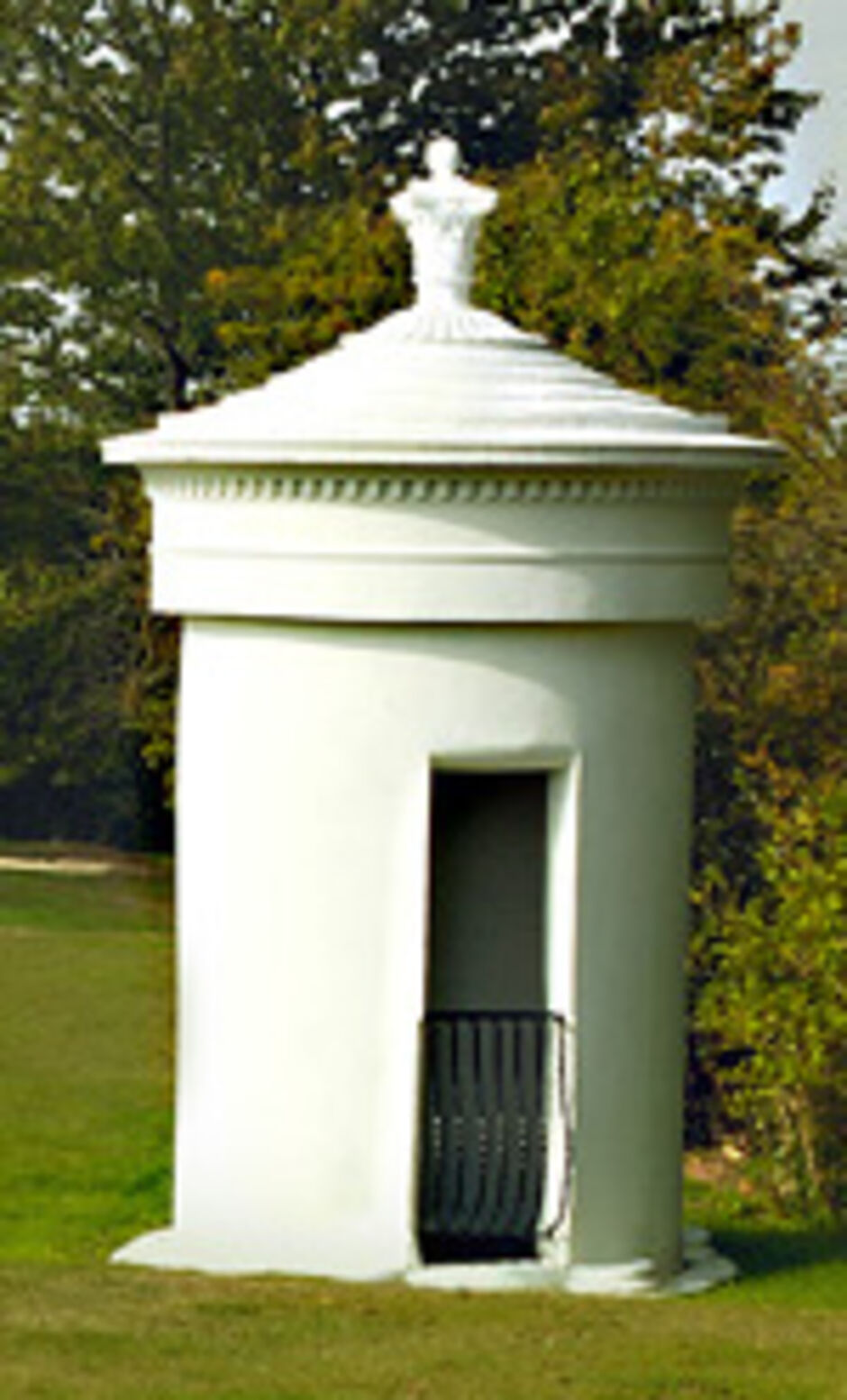 The Temple was adopted as the symbol of Chislehurst Golf Club in 1953.

The Temple itself dates from Strode’s “Frenchification” of the clubhouse in 1860.  There was a well-head in the grounds of the Prince Imperial’s favourite holiday home outside Paris, the Chateau de Saint-Cloud, and it is thought that the Temple was placed in the grounds of Camden Place to assuage the Prince’s early homesickness.

The design of the temple itself can arguably be dated back 2,500 years to the Choragic Monument of Lysicrates, which stood on the slopes of the Athenian Acropolis.  In 1770, James ‘Athenian’ Stuart, a keen amateur historian and architect, constructed an accurate copy of the Monument in the grounds of Shugborough Place in Staffordshire.  The copy was known as the Lanthorn of Demosthenes and its remains can still be viewed at Shugborough Place today.

It was an exact copy (externally) of the Lanthorn that then made its’ way to the grounds of Camden Place and is still enjoyed by members and visitors alike today, having been restored in 1960.

The Temple Trophy is a silver replica of the Temple and is contested in an annual foursomes match.

The Club Office is staffed between
9:00am and 5:00pm, Monday to Friday.

Members have access to the clubhouse and locker rooms from 7am until the bars close each evening.

The above hours may change to meet seasonal demand or the needs of a booked event within the clubhouse.

If you are planning to visit us (particularly during winter months), it is always worth calling the Members' Bar on 02084 673 055 to confirm bar and catering times.